Where 10 years of Foursquare has led us 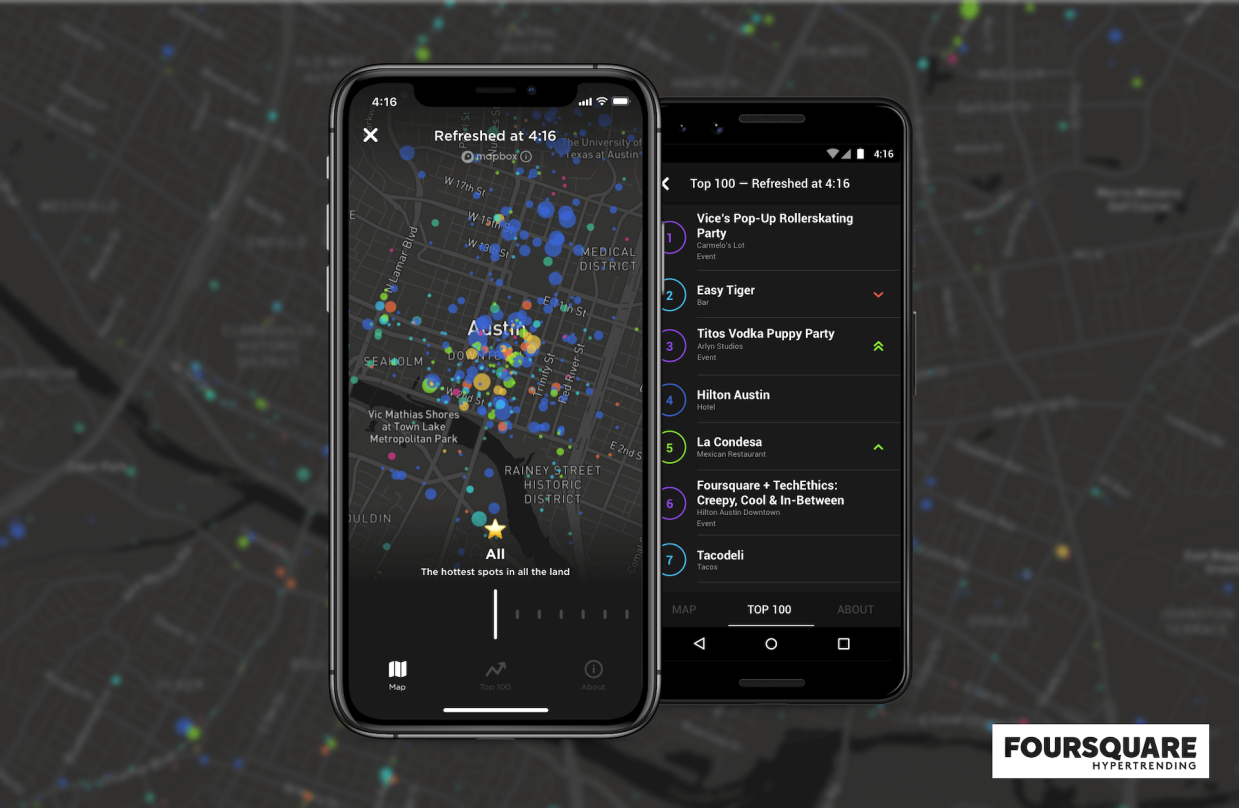 It’s been 10 years since we launched Foursquare at SXSW in 2009. We say “launch” but back in those days it was really just “hey, let’s show our friends what we’ve been working on”. In those 10 years, we’ve seen the notion of location-based services explode, and along with it, an explosion in legitimate concerns around privacy and ethics. In those 10 years, we’ve invested heavily in both the delights and the concerns of the technology we’ve been building. As it’s our 10 year anniversary, we want to show off something we’ve been working on that reflects our commitment. Wanna see?

Say hello to Hypertrending – the latest project to come out of Foursquare Labs, our internal R&D team.

Hypertrending is a top-down view of all the places and phones that Foursquare knows about in Austin. The “Map” view gives you a real-time look at how people are spread throughout the city – each dot represents a different place, the size of each dot corresponds to the number of people at each place, and each color represents a different type of place. If you see it on the map, you’re seeing it live. The “Top 100” view charts places and events as they trend up or down in busy-ness (based on the number of phones inside those places) while the up/down arrows represent whether that place or event has become more or less busy in the past 30 minutes.

The Hypertrending demo is baked into our Foursquare City Guide app and Swarm check-in app – download and open either app and shake your phone to access it. We secretly hope people use Hypertrending to decide where (and when) to go next – e.g. a futuristic version of what David Carr described during SXSW 2010. We expect Hypertrending to foreshadow the type of tools we’ll use in the future to help us navigate cities and the world around us.

Hypertrending is powered by Foursquare’s “Pilgrim” technology (something we’ve been working on over the last 5+ years) which is what allows us to understand how phones move in and out of more than 100 million places around the world. The data you see in Hypertrending comes from our “first-party panel” – a mix of data from our own apps and other apps that use our technology. All the data in this panel is anonymized and aggregated. Said another way: Hypertrending lets you see the movement of the panel population as a whole, without showing you anything about any of the individuals in the panel.

You can think of Hypertrending as a place-based version of Amazon’s “Most Read” books list (which is based on Kindle data) or Spotify’s “Top 200” songs (based on streaming data). And while Foursquare has always had “Trending This Week” lists (foot traffic + newness), we’ve never done anything quite like this with real-time location data.

(If you’re Old School Foursquare, you might remember our “Trending Now” view and the 10 different variations of the “Swarm” badge. The important distinction is that “Trending” and “Swarming” were always based on how many people pressed the “check-in” button. These days, and 10 years into Foursquare, we don’t need a button tap to understand where millions of phones are across 100+ million places around the world. We’ve long talked about making “a check-in button you never had to press” – Hypertrending is part of that vision realized, spread across multiple apps and services.)

We realize location data is different than data about books and music – location data is some of the most sensitive data there is. And we’re aware that Hypertrending walks a fine line between being “creepy” and “cool”. That’s why we decided to make the Hypertrending demo available only in Austin, only during SXSW, and we currently have no plans to launch it to a larger audience after SXSW. We are limiting access to it because we know it’s provocative. It’s also our belief that before something like our Hypertrending demo changes the game, we should try to give everyone a chance to get their head around the rules. So we are looking to get your thoughts and feedback on Hypertrending as it relates to the larger conversation around the need for transparency, thoughtful leadership, and ethical behavior from technology companies.

Why is it important that we get your feedback? Because after 10 years, it’s clear that we (Foursquare!) are going to play a role in influencing how contextual-aware technologies shape the future – whether that’s apps that react to where you are and where you’ve been, smarter virtual assistants (e.g Alexa, Siri, Marsbot) that understand how you move through cities, or AR objects that need to appear at just the right time in just the right spot.

We want to build a version of the future that we’re proud of, and we want your input as we get to work building it.

(I don’t want this to come across as one of those “we’re changing the world” founder clichés, but my belief is, if your company has the privilege of making it this far, it becomes your duty to make sure your company is doing its part to push the industry in the right direction. We’ve always prided ourselves on our ability to help “invent the future”, but we’ve also asked ourselves what’s the point of trying to invent the future if you’re irresponsibly helping to create a version of the future that people hate?)

We made Hypertrending to show people how Foursquare’s panel works in terms of what it can do (and what it will not do), as well as to show people how we as a company think about navigating this space. We feel the general trend with internet and technology companies these days has been to keep giving users a more and more personalized (albeit opaquely personalized) view of the world, while the companies that create these feeds keep the broad “God View” to themselves. Hypertrending is one example of how we can take Foursquare’s aggregate view of the world and make it available to the users who make it what it is. This is what we mean when we talk about “transparency” – we want to be honest, in public, about what our technology can do, how it works, and the specific design decisions we made in creating it.

With that said, Foursquare’s approach to analytics focuses on visits (not location trails), and aggregated and anonymized data (not individuals’ location data). We use clear opt-ins and we use simple language in our consent screens. What you see in Hypertrending is similar to what customers of our advertising and analytics products see in their dashboards. (Sidenote: I am super interested in this idea of “enterprise analytics designed for consumers to use.”) Hypertrending only sees phones that are stopped at a specific place (e.g. the convention center, the bar at the Driskill Hotel, Lamberts BBQ), so the map won’t show people walking, driving, or otherwise in-between places. We’ve also filtered out stops at “sensitive” categories like homes or apartments, religious centers, divorce lawyers’ offices, etc… which means you’ll never see these types of places in Hypertrending. (For more on our approach to privacy in general, listen to our CEO Jeff Glueck’s recent podcast on The Verge.)

As one of the founders of the company, it has been personally important for me to be super transparent with those who use our products about what we do and why we do it. Ten years in, this is more important, not less.

This is especially true as Foursquare is a platform that other developers build upon. Sometimes the most rewarding part of being a platform company is seeing what people build on top of the tools you give them. Therefore, we want to make sure we’re empowering developers with tools and technologies that we’ve pre-vetted as thoughtful and ethical, and that we put safeguards in place to make our tech easy to use in an appropriate way.

We’re showing off Hypertrending this week not just because we want to show everyone the amazing tech and data we have as a company, but also to show you all the explicit decisions and thoughtfulness that went into designing it. Our hope is that the demo piques the interest of developers and entrepreneurs and inspires them to build things we can’t even imagine using our tools, technology, and data platform. Building city guides and data viz comes naturally to us – but we want to see what the urban planners, the game developers, the folks innovating with AR, etc. would do with a Hypertrending-esque data set. If you made it this far in this blog post, there’s a good chance you’re one of the “invent the future” types – let’s find a way to work together and make amazing stuff.

To those developers, our massive community of fans, users, Superusers, and to all our partners and friends we’ve made along the way – thank you for 10 years of Foursquare. Ten years ago we thought people were going to laugh at us for our little Foursquare app with its silly badges and mayorships. Back then we were pushing on the boundaries of a space that barely existed. Ten years later and we’re still pushing the boundaries of what’s possible, only now with contextual-aware location technology across millions of mobile phones around the world.

If you’ll be at SXSW, I’ll be giving a talk on Saturday morning about Foursquare and Hypertrending, our journey to get here, and our thoughts on creating an ethical tech company. If you’re curious about the way we think about the world, the industry, the future, or anything in between, please swing by and say hi – it’ll be good to see you all again!

(ps: Huge shoutout to everyone at Team Foursquare who worked to push Hypertrending into the world – Nate, Emma, Avneesh, Jack, DavidW, Andrew, Jay, Shashank, BenM, Saumya, Christy, Sarah & the Comms Team, Jose and the Support Team. Proud and thankful to get to work with y’all day in and day out!)